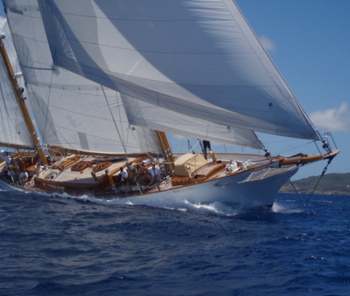 Belle Aventure, a 1929 William Fife design sailing yacht was coated with HullSpeed 3000-Series and HullSpeed 101 primer in March 2012. The ‘green’ performance coating system was applied during routine maintenance following several years of modernization refits to make the boat more technologically efficient and retain its near‐original condition. The 94’ LOA Belle Aventure took first place in the “Professionally Restored Sailboat” category during the 2010 Concours d’Elegance at the 19th Annual Wooden Boat Show hosted by Mystic Seaport in Mystic, Connecticut. Prior to the event, Belle Aventure had undergone a major restoration and refitting at Boothbay Harbor Shipyard, in Boothbay Harbor, Maine.

While at Boothbay Harbor Shipyard, Belle Aventure underwent mechanical, electrical, interior joinery, and sail and rigging work. An engine bed for the new engine, cabin soles in all three rebuilt heads, and all new electrical wiring and distribution were installed to enable the boat to be compatible with the latest technologies. All mechanical systems were updated and all interior joinery, woodwork, and cabinetry in the cabins were refinished. The original planks were refastened with over 5,000 custom made fastenings. In addition, Nat Wilson, renowned sailmaker, made three new jibs, a mizzen, and mainsail.

This March, Belle Aventure underwent seasonal repairs and refinishing, including the new hull coating system, at Wayfarer Marine Corp. in Camden, Maine. The work was contracted to Quality BoatWork, a subcontractor to Wayfarer Marine Corp., based in Newport, Rhode Island. Quality Boat Work has over 30 years of experience in paints, varnishes, and refinishing and travels to various destinations based on the customers needs. After working with HullSpeed 3000‐Series and HullSpeed 101 primer, the outfit was impressed by the lack of fumes and ease of application. Wayfarer Marine Corp., which housed the operation, has been doing custom and routine work on all classes of boats for nearly 50 years and is an annual stop for Belle Aventure and other classic yachts alike.

Dave Thompson, Captain of the Belle Aventure, contacted HullSpeed Performance Marine Coatings regarding a bottom paint system in hopes of finding a ‘green’ alternative to more commonly used, environmentally harmful bottom paints. Mike McCue, owner of Belle Aventure and creator of FLIPBOARD, Apple's “iPad App of the Year” and one of TIME's Top 50 Innovations, was adamant about utilizing a sustainable eco‐friendly bottom paint system for the boat.

HullSpeed Performance Marine coatings combine water‐based, anti‐fouling free, epoxy/silicone technologies that provide a foul‐release surface which is both durable and improves speed, fuel economy, and ease of cleaning. The water based coating system contains very low VOC’s and can be applied to wide range of substrates including, but not limited to wood, aluminum, steel, fiberglass, and carbon fiber.

Belle Aventure’s teak hull was prepped to 80 grit, cleaned, and then rolled with HullSpeed 101 primer. Three coats were applied with a 1/4” nap roller. The boat sat overnight, and then HullSpeed 3000‐Series was rolled over top with no additional surface prep. Three coats were applied with only 10 minutes between coats. After curing for 72 hours, Belle Aventure was launched with careful consideration for the slickness of the coating and slippage of the support slings. Unlike current foul‐ release coatings, HullSpeed is durable enough to withstand the abuse of launching and docking without added precautionary measures.

As coating regulations in domestic and foreign ports and harbors become more stringent, water‐based paints like HullSpeed Performance Marine Coatings are an deal and cost effective solution. The low VOC content and water‐based structure of the coatings allow for simple, ultra‐low fume applications and hassle free shipping. HullSpeed Performance Marine Coatings have been proven to increase speed by as much as 9.5% and improve fuel economy by as much as 8%. With rising fuel costs and increasing demand for world goods shipped by sea, saving money at the pump and reducing time getting there can mean thousands, if not millions of dollars, extra for other investments. Compared with alternative fuel adaptation refits, which often include engine replacements and/or critical system restructuring, applying bottom paint is a very inexpensive but highly effective option. More specifically, bottom paints made to improve hull efficiency are high return on investment alternatives that directly reduce the carbon footprint of the operating vessel.

HullSpeed Performance Marine Coatings originated in the performance sailing industry as a paint designed to improve speed. Over the past several years, HullSpeed has been targeting the commercial, patrol and military markets to optimize the performance enhancing and eco-‐friendly characteristics of the paints. HullSpeed Performance Marine Coatings is a division of Greenfield Manufacturing Inc. located in Saratoga Springs, New York. Greenfield Mfg., Inc. was established in 1998 as a chemical manufacturing company and produces millions of pounds of chemicals per year. The HullSpeed product line was established in 2002 with numerous applications in the performance, commercial and recreational marine markets. Viable applications include but are not limited to the aeronautic, automotive, energy, and industrial industries.

HullSpeed® products are designed to improve speed, acceleration, fuel economy, and maneuverability by providing the ideal surface energy for drag reduction and performance.

Follow us on your favorite social media platform to keep up to date on all the latest news and updates from Hull Speed Performance Marine Coatings.